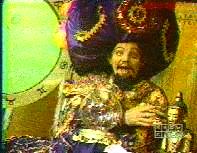 Forget psychic hotlines! Tell Dionne Warwick to get stuffed! If you want to know your future, there’s only one person to turn to in Castle Frightenstein — the Oracle. The Oracle, played by Billy Van, is an Eastern mystic occupying a tent somewhere in the bowels of the castle. He appears in most episodes of the show, but not all. The Oracle himself is an Asian fellow, sporting a Fu Manchu moustache and goatee and long fingernails (which he keeps poking himself with), and on his head a big purple cushion, to match all the cushions on the floor around him. To his left he keeps his buddha statue Voodoo (who occassionally insults him telepathically), and to his right the big Zodiac circle which through the wonder of Chroma-Key informs him of each day’s horoscope sign. And right in front of himself the Oracle keeps his most important possession — his crystal ball (not a real crystal ball actually, more like a hollow glass sphere with a round opening on the bottom). The Oracle sketch opens with the man himself welcoming us the viewers into his domain, while sitars play in the background. He launches into superlatives to describe the greatness of his mystic abilities, and always makes the mistake of talking with his hands — one sweep with his right hand and the crystal ball is out of the picture and smashing into little bits. This deflates him a bit, and invariably gets him talking of the great expense of replacing all those broken crystal balls. Fortunately he always has a spare handy, so he fetches it (and gets his hand caught inside, which comes out with a loud pop!) and sets it in place. To get the day’s sign he delivers the magic words to the Zodiac circle: “Oh swirling mists, that the gods have kissed, which sign, whose life, will fortune twist?” The horoscope itself comes from the crystal ball (sometimes filled with carbon dioxide for a neat effect): “Magic crystal, crystal ball, tell me now, tell me ALL!” The sketch is brought to a ringing conclusion by a smash of a gong (perhaps Grizelda walking into her pot?) which annoys the Oracle to no end, and at the finish he reminds us to “Look to the stars.” The character of the Oracle is most interesting to me as a juxtaposition to the Professor — the latter is a man of fact and reason, the former one of superstition and myth. Perhaps the astrological mumbo jumbo spouted by the Oracle acts a bit as an antidote to the hard and precise logic of the Professor.

In certain episodes the Oracle also appears in abbreviated sketches in which he answers questions supposedly sent in by viewers on topics of mysticism, the occult, and the supernatural. The most interesting feature of these vignettes is the way the Oracle pauses to consider his reply to each question — he licks the letter (which is always on a small coloured piece of paper) and sticks it to his forehead. 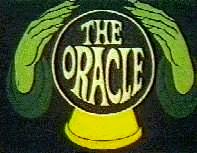 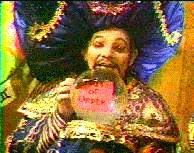 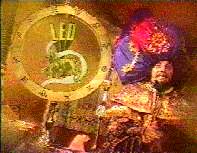 Oracle — “Thanks for your Letters”

The Oracle’s Theme and Intro

Oracle — “I see Nothing”