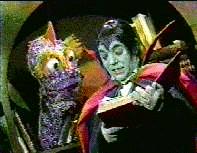 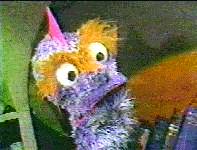 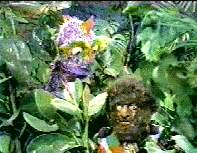 I put this guy first because he is my favourite character. Gronk is a puppet character of a sea serpent; we hear from other characters that he is of great length, but the only part of him that is ever visible is a 2 foot length of neck and then his head. Gronk is probably the peppiest character in the castle (with Grizelda close behind); he is full of mischief and loves to make a good joke. He is a purple monster, with a red fin sticking out of the top of his head, tall yellow eyebrows and big eyes he likes to cross when blasting forth his name: GRONK! Gronk appears in two major skits, one with the Count and the other with the Wolfman (both appear in less than half the shows). In the skit with the Count, Gronk appears with his head poking out from behind a bookshelf, and the Count attempts to educate him on some topic pertaining to the sea and water: lighthouses, ocean liners, ice breakers, frogmen, Horatio Nelson, etc. Inevitably Gronk knows nothing of the subject, so the Count suggests they look it up in his book, called “Everything You Ever Wanted to Know About…” that day’s topic. The Count reads a few paragraphs, and Gronk, scamp that he is, takes every opportunity to put wacky words into the Count’s mouth, which makes the Count cry but us and Gronk laugh. In the second skit, Gronk appears with his head sticking through what is supposed to be jungle foliage (looks like a bunch of rubber tree plants pushed together), and does a little skat to himself until the Wolfman sticks his head into the clear, whenceforth Gronk delivers a really bad joke.

Gronk — The Count and Igor 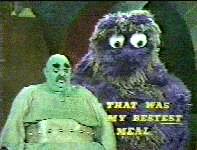 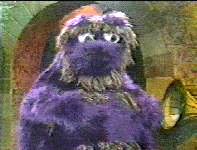 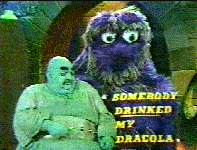 This sketch, which is seen in maybe half the episodes, has two characters in it who don’t appear anywhere else in the show. At the start of each sketch, Igor makes a statement to the camera which contains some grammatical error (eg. my feets is killing me; this castle’s gonna collapse; ours is the worstest castle; that was the bestest meal I ever ate). A police siren wails and the Grammar Slammer pulls over Igor, and the camera pulls back to reveal the Grammar Slammer Bammer laying his big mitt on Igor’s shoulder. The Grammar Slammer is just a disembodied male voice, who harangues Igor for his bad grammar and ultimately reveals to him the correct version of his earlier statement (which appears in text on the screen), all the while trying to keep a lid on the Grammar Slammer Bammer’s aggression. The Grammar Slammer Bammer is the muscle of the outfit, a huge purple monster with long fur everywhere and hyperactive eyebrows, and a very deep voice. The GSB is another of the funniest characters on the show; he wants nothing more than to pummel Igor for his bad grammar, and is continuously making threats and winding up to land a big punch on Igor’s noodle (much to Igor’s dismay), but his boss the Grammar Slammer never lets him follow through. There’s nothing I would like more to see than the GSB haul off on Igor, but it never happens. At the end, as Igor scampers off the GSB promises to “hammer Igor tomorrow, for sure”.

Bammer — “I love Igor in the morning” 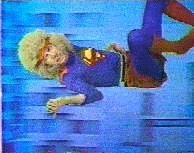 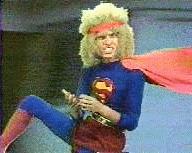 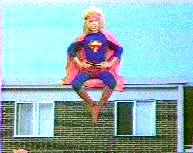 This guy is another signature character of the show. He is not played by Billy Van (surprise!) but by Mitch Markowitz, a rather scrawny fellow with a big blond afro. Very un-superhero-ish. The character never appears in any skits, just in the short 15 second spacer bits strewn throughout the show, leading out to/in from commercials, or at the end of the show. He wears the Superman costume and a red headband, and through Chroma-Key is shown flying around with flapping cape, or else sitting someplace high up, like on telephone wires. He usually has something entertaining to say.

Superhippy — “The Count, NOT funny”

Superhippy — “What does it mean”

Superhippy — “Don’t call me a hippy!” 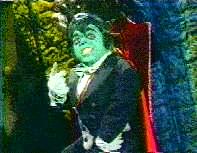 This character is played by Guy Big; the exact name is unknown as he is never called by name (Count Munchkinstein perhaps?). He looks just like the real Count, except for the height thing. The Mini-Count appears in basically two sequences: in some episodes when the Count and Igor are answering the phones, the last call will come in on the coffin phone, and when the Count opens the coffin (which is propped up against the wall of the castle foyer) 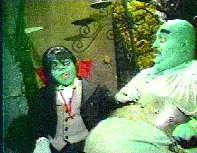 out will pop the Mini-Count to make some remark, step on the Count’s foot, etc.; also in most episodes after the last commercial break and just before the Wolfman, there is a short sequence where the Mini-Count sits on Igor’s knee and one of them tells a joke (some are actually pretty good).

Guy Big — “This show could be a LOT worse”

Guy Big — “Grizelda is the witch” 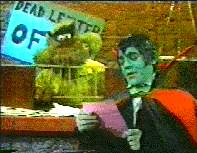 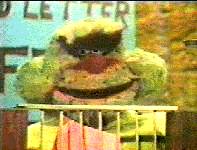 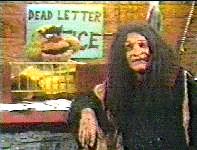 Harvey Wallbanger is the official postmonster of Castle Frightenstein, in charge of the Dead Letter Office. He is a tan coloured puppet, covered in fur with fat bulging cheeks and a deep gravelly voice. Harvey appears in short sketches with both the Count and Grizelda, in which letters supposedly sent in by viewers are answered. In her skit Grizelda answers several letters posing questions about etiquette, and when inevitably she gets too complimentary of herself, Harvey expresses his disbelief with great wit. The Count only answers one letter each time, which usually poses a question about one of the characters in the castle (eg. What shoe size does Brucie wear?). The Count enters the post office and goads Harvey by referring to him by some goofy name (eg. Harvey Sapsucker, Harvey Slingbanger), which gets Harvey riled until he bellows out the correct pronunciation of his name. Harvey gets his revenge though, by jerking the Count’s chain by suggesting there is no mail for him (which gets the Count sobbing) and then by stamping the Count’s hand when he reaches through the grill of the post office counter to pick up his daily letter.

Harvey — “Come back to Kapuskasing”

Harvey — “This show is definately over.” 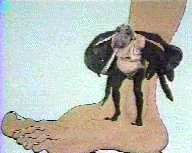 In every episode this guy (played by Mitch Markowitz) is shown dropping down onto a big cartoon bare human foot, while a mosquito version of “Flight of the Bumblebee” plays in the background. He tells a really bad joke about a fellow insect, usually culminating in a pun, then declares “Lunch time!” and plunges his probiscus into the foot for a warm treat. 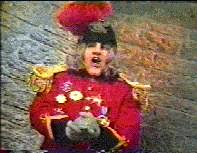 “When I’m calling youuuu-ooooooo-ooooooo-oooooo <splat>” This guy (played by Billy Van) gets a pie in his face every time after singing for a second or two. Huge chin; wears a nice red uniform with medals and a black helmet with a red plume. He is singing a Slim Whitman song, which is actually featured prominantly in the 1996 film Mars Attacks! 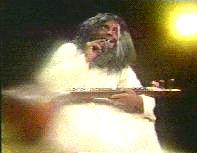 This guy (also played by Billy Van) is another of the castle loonies. He is a crazy east Indian guru, wearing a white robe, and with long black hair and beard, sitting cross-legged with a sitar in his lap. He twangs his sitar once, then speaks some gibberish as if it were great wisdom. The bit ends with a pile of flowers being dumped on his head.

“The three legged jackal, burning with many colours, is in the end only bewildered, by the gums, of its own teeth.”

“It is written, that he who kicks the blind beggar, in the marketplace, during an eclipse, can only curse the camel, for its lack of discipline.”

“It is written, that the weaver who uses the reeds of the sacred Ganges, computes his worth in man hours per foot pound.”

Twice per episode there is a short bit where a still shot from an old ‘B’ monster movie is shown on the screen (usually of the monster alone or attacking some hapless victim), and Billy Van does a voice-over putting a humorous line into the mouth of one of the characters in the picture. Here’s a couple of examples below with corresponding voice-over lines. 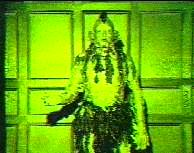 The Tulips are fake flowers set in a planter box; at the start of every episode the Count implores them to grow or sprinkles some potion over them from a watering pot. They reply by keeling over to the sound of a slide whistle. They occasionally speak, with chipmunk voices. 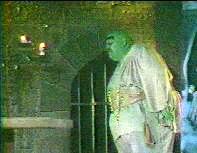 The three-toed sloth, who lives in a dungeon off the front foyer of the castle, is just a sound effect; we never see it. What a meany though! It’ll never let Igor keep a pet for himself! Always growls violently when Igor asks to keep a pet. Occasionally gets loose and crawls about the castle, harassing the Oracle and the Librarian. Note the two different voices. 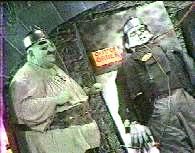 Perpetually out of order Frankenstein monster, laying on his back in the castle foyer. Count Frightenstein’s invention, and just like all the others, he doesn’t work. The Count and Igor have tried everything to get him to move, short of pouring Dracola down his throat. Once the Count delivered a charge to Brucie’s neck bolts and succeeded in getting his lips to move. Wears a peace symbol around his neck.

Another sound effect character; runs screaming away from Igor everytime he drops off the mail at the castle door. 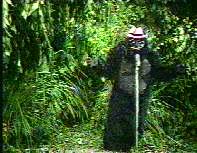 You’d think it’d learn! Gets konked on the head with one or more baseballs every time it appears out of the jungle foliage, and keels over like a slab of concrete. Various attempts at blocking the balls never work. The Gorilla is another show staple, and is played by Billy Van.

Boris is a puppet plant; it is one of the Count’s pets, and has quite a bite. When the Count tries to feed it, it grabs a hold of his hand and won’t let go. Growls like the Sloth when hungry. 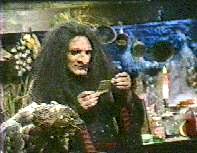 Appears perched on the Librarian’s chair, and on a table in Grizelda’s kitchen. Caked in dust. Takes a lot of abuse; it’s a wonder its wings don’t fall off!

Haunts the library. Is never seen, but is frequently heard laughing and slamming doors.

A rather crude pantomime creation; makes cameo flybys in Grizelda’s kitchen and the library.

This thing looks rubber; occassionally it drops in on Grizelda and Vincent Price. Has been spotted in the library as well. A quick swat usually gets rid of it.

Calls the Count on the phone and chirps at him in a high-pitched super-sped up incomprehensible voice.

Grizelda’s broomstick (get it? Hi ho Sliver! Away!).

The skull which is always seen on a bookshelf behind the Librarian, and which Vincent Price also frequently uses.

One of Bwana Clyde Batty’s friends. A “virtual” bird he keeps in a cage; the reason we can’t see it he tells us is that it flies “faster than the speed of sight”. Occasionally he lets it out of the cage and it rockets away with appropriate sound effects.