Of all the sketches on the Hilarious House of Frightenstein, none has as strong a grip on my memory as that of the Wolfman. In every single episode this hip cat (or dog) takes us on a visual and aural trip that is probably the closest thing to a drug trip you’re ever going to see on Saturday morning television.

The Wolfman character is played by Billy Van, and is probably based on the famous 50’s rock ’n roll DJ Wolfman Jack. His appearance is very canine, with hair covering every part of him (that you can see) except for the nose and the palms of his hands, and nice fangs that he likes to flash. The Wolfman dresses himself almost like a hippy, wearing coveralls, a striped rugby shirt, and a knee length scarf, all topped off with a button reading “Our Hero” pinned right over his heart

The sketch itself is basically just a music video sequence, with the Wolfman and Igor dancing to a rock ’n roll tune from the late 60’s/early 70’s. The tunes played cover the range from true classics (including selections from such giants as the Beatles, the Rolling Stones, and the Doors) to forgotten clunkers (anyone remember the 1910 Fruitgum Company?); to someone of the time they would probably all be familiar (nearly every one charted in the Billboard Top 40 in the U.S. between 1967-71). The sketch opens with an introduction (“I am da Wolfman”) and a juicy howl, and then a welcome to EECH (pronounced yuck), compliments of Dracola. The Wolfman is seated behind his console, a table bearing stacks and stacks of wax, a gigantic microphone, and a turntable that doesn’t turn. Before he has spoken long the phone will ring, with someone calling in a request or just for a chat. The Wolfman then gives a good yank on the chimetime vine, which rings a bell to mark the hour.

Which hour? That is left to a dart to determine, propelled by a no-look over-the-shoulder throw at the phony clock on the wall (sometimes taking several tries). With that done, it's TCB time (time to Take Care of Business), and so the Wolfman slaps the day’s single on the turntable and moves the needle into place. Once the song has begun, it is time to dance. The Wolfman grabs his bat guitar, runs out from behind the table to a green screen set up against a wall, and through the wonder of Chroma-Key, the magic begins. To someone who hasn’t seen the show, it is difficult to describe the swirling patterns of constantly changing colours that appear; I can only compare it to a kaleidoscope or that scene from 2001: A Space Odyssey (you know the one). The whole of the screen is filled with colours, with one pattern visible where the green screen is, and a different one everywhere else. What we see of Igor and the Wolfman are simply their silhouettes (this is how we know it is Igor there — he has a big I on his chest which the pattern on the green screen shows through on). Due to his great girth I suppose Igor is not the greatest dancer; he tends to simply rock back and forth, flapping his arms. The Wolfman though is not bad - he even has a signature step, a sort of slide move. The two boogie together for a good two or three minutes (with the Librarian frequently interjecting “Groovy!”in the middle), and then it is over.

Examples of items the Wolfman and Igor dance with:


In some episodes, the Wolfman sketch actually appears twice: one a full version, the other a truncated one featuring only the song intro and dance sequences clipped from a sketch from another episode. As well, the Wolfman appears in a short sketch with Gronk in a few episodes (see the Gronk section of the Other Characters page for more details). A pretty corny bit, in each skit Gronk simply tells the Wolfman a different but equally bad joke. 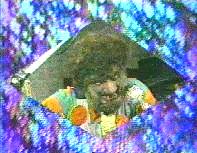 Wolfman — Intro: Joy to the World

Wolfman — “PetVet is a boss cat”